Help this game reach its goal

The local Elementary School, library, book repository, what have you, is about to throw an ungodly amount of perfectly good books into the trash! It's up to a few dedicated Book Worms, the most elite worms we have, with an ultimate thirst for knowledge, to get in there and save as many books as they can.

The greatest worms known to wormkind– The Flatworm, The Earthworm, The Silkworm, The Caterpillar, The Garter Snake, and The Electric Eel!

In order to download this game you must purchase it at or above the minimum price of $1.50 USD. You will get access to the following files:

For every copy of The Longest Inch that is sold, a community copy will be made available here for someone to get if they cannot spare the money. If your budget can't afford any games, these copies are for the community, and that means they're for you.

The Longest Inch is a one-shot ttrpg about a gang of worms trying to heist books from an elementary school library before they can be weeded out.

The PDF is 4 pages, black and white. There's no art, but everything is easy to read.

Character creation is streamlined and can be done with just a few rolls. You have a worm type (which can range as far afield as a flatworm or electric eel, and each of which comes with its own special ability,) and you have a field of study. The fields are a great comedy beat, and they include things like calculus and advanced aerodynamics.

Basic dice rolls are done with a single d6, succeeding on evens. If your field of study applies to the situation at hand, you add a second d6. You can also monologue for a third d6.

You also have a small pool of tokens, when are a currency for how much time is left in the heist. You can spend tokens to alter the situation around you, but when you run out you choose between bailing or rolling 3d6 and getting caught on a failure.

There isn't a clear end condition to the game, so a lot of Longest Inch is dependent on the GM's storytelling and sense of pacing. That said, basic rolls aren't too tough, and there's a lot of leeway for rescuing teammates from bad situations with tokens. This is the kind of game where the players should expect to win, and to have fun while doing so.

Overall, if you're looking for a lighthearted high energy oneshot, Longest Inch should definitely be on your list. It's also ideal as a game for younger audiences, as the dice don't intrude very much, there's lots of room for creative freedom, and it's very easy to run a heist with no violence involved.

-Tokens add a little bit of pressure and tension to the scenario, but a player that doesn't spend them will almost never lose them. If you want to run a higher stakes game at your table, you may want to have players lose 1 token on a failure and 2 tokens on a critical failure. 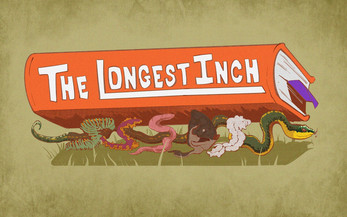