Help this game reach its goal

THE GOOSE KING HAS AWOKEN.  The annual event has arrived, in which the Goose King rises and sends his most powerful Geese soldiers to the dangerous lands of The Beach to gather Shiny things for his most powerful Horde. Perhaps he simply wants as much treasure as possible, or perhaps he yearns for the greatest treasure of all.

Regardless of his wants, it is on you and your squad of geese to brave the horrors of The Beach and battle the Goose King's enemies to bring the king what he desires most: Shinies. If the Goose King's wants are not met, the risk of all out war between The Goose King and the Seagull Armada could threaten to drown the world.

PLAY AS ALL YOUR FAVORITE GOOSE BREEDS:

Needed For This Game:

In order to download this game you must purchase it at or above the minimum price of $2 USD. You will get access to the following files:

For every copy of Geese At The Beach that is sold, a community copy will be made available here for someone to get if they cannot spare the money. If your budget can't afford any games, these copies are for the community, and that means they're for you.

The Goose King has awoken. This is an annual event. Gather shiny objects at the beach to appease it, or it will end the world.

This is a PbtA game, and probably one of the stronger premises I've seen for a just-pick-up-and-play silly pulp-style thing. It's flavorful, it's got a wacky sense of humor, and the reader never gets lost. The game's objectives are always clear, and *everyone* knows how to roleplay a goose.

Also, the types of geese you can play as include a duck, a pelican, and a cat, and not only is each playbook wildly powerful, but they all together form a sort of chaotic balance that both relentlessly drives the action and leaves the GM clinging to the narrative for dear life.

There's a few drawbacks, though, and if you're super invested in these particular design elements GatB may be less your thing. Layout, for example, is very bare bones, and it's got some weird spacing and inconsistent indenting in places. There's also some narrative dissonance, where a couple places in the game and on the game page establish the Seagull Armada as the big threat, whereas other places suggest that the Goose King can't really be stopped by anything and wouldn't so much as bat an eye at the Armada. Similarly, the game is inconsistent as to whether or not collecting its Shinies or not-collecting its Shinies is the thing that sends the Goose King back to sleep.

Also the way information is organized and presented is a bit jumbled, and this requires the GM to sort of improv the game flow. Basically, it's clear that the players are supposed to go to the Beach and collect Shinies, but the extent of the instructions given to the GM is to "go hog wild"---which, admittedly, is good advice in context and fits the spirit of the game.

And this game has a lot of spirit. If you don't get bogged down in looking for particular rules for things and you just wing it, the playbooks are wonderful, the enemies list is great, and the story concepts are a ton of fun. Honestly, I think I'd recommend reading the playbooks before you read the rest of the game, since that's where a lot of GatB's soul is.

Overall, if you want a frenetic but deeply silly game and you're willing to do some spot rules, this is absolutely worth your time. If you're not super comfortable GMing yet, or if you don't like just winging it, it may be worth coming back to this titled goose game later.

For anyone on the fence, I'd definitely recommend checking it out.

-Page 6, Basic Move options don't clarify when you pick from which list (although it's pretty easy to tell)

Hey, thank you very much for this wonderful little review, it's a very nice surprise to receive in my inbox! Happy you like my chaotic little goose game!

I hope you'll enjoy the eventual release of more playbooks. 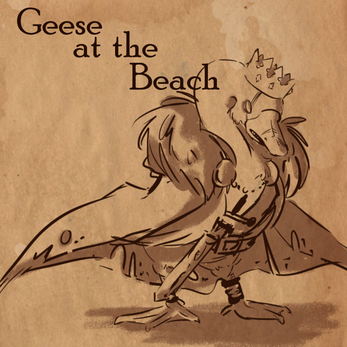